MIMO is a multi-input, multi-output-based wireless communication system, which supports the transmission of real-time packets. The technique that enables the ...

MIMO is a multi-input, multi-output-based wireless communication system, which supports the transmission of real-time packets. The technique that enables the radio signal to emphasize on target is beamforming. Generally, the signal from the antenna is expanding larger bypassing several paths. As a result, it loses its strength while processing. To overcome this issue, beamforming was introduced. The main job of beamforming is to focus on the signal by narrow downing the path. In other words, it prevents multipath interference. This action makes a signal save the strength.This article describes you fundamental and advanced information of MIMO Beamforming Matlab!!!

In recent wireless communication technologies, MIMO has become a default standard because of its unique advantages. One is 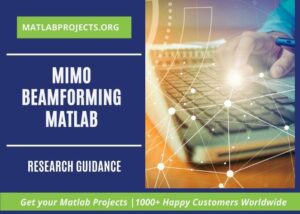 high datarate support and the other is resilient to frequency-selective channels. Consequently, the demand for improved MIMO OFDM Matlab Simulink technology is increasing more in wireless systems. However it has several benefits, it is technically tough in incorporating with larger-scale systems due to the configuration complexity. Since a greater number of antenna components is connected will increase the complexity in resource allocation. So, it requires efficient methods of spatial multiplexing and antenna arrays for transmission.

Among several methods, Beamforming is a widely employed method to enhance the SNR which eventually increases the performance of the system. And, it can be computed by using the bit error rate (BER) parameter. In fact, beamforming is classified into two main categories as narrowband and wideband which are further classified into the below types.

Now, we can see in what way the MIMO beamforming method is working in wireless systems. Beamforming follows the working technique of multi-antenna communication. If the devices are enabled with beamforming characteristics then it fully concentrates their frequencies in the direction of the receiver. For instance: we can say flashlight analogy which uses bulb as the transmitter.

How does MIMO Beamforming Matlab Work?

In multi-antenna communication, multiple patterns are collected from several antennas and grouped to form a beam that points towards the destination. The frequencies opposite to the pointed destination will intersect at one point to increase the strength of the beam. And, the other frequencies which scatter in multiple paths will lose their own strength and get destroyed. Therefore, we conclude beamforming is the best technique to enhance the strength of the signal in comparison with others. To the end, the performance of the beamforming technique is assessed through various metrics such as velocity, noise level, destination location, distance, signal, QoS, etc.

Next, we can see the effective techniques used to reduce inter-cell interference in the absence of inter-eNodeN coordination. The two most important methods that meet this requirement are 3D and vertical beamforming. Further, we also support you in other emerging techniques for improving beamforming performance. To know other interesting techniques, communicate with our team.

In MIMO beamforming, interference is one of the major issues that affect the system performance. Although it is a threat, beamforming provides several methods to reduce or eliminate the interference from both external and internal environments. Here, we have given you the latest techniques which give the bests in preventing interference in MIMO beamforming. In specific we also suggest other techniques based on your project objectives. And, we are more appropriate in the selection of techniques to assure you precise results.

What are the advantages of beamforming?

Next, we can see the reasons behind choosing the Matlab tool for implementing MIMO beamforming. Among more development tools, what makes us prefer MATLAB? Overall, MATLAB is a whole package to meet all the requirements of the Beamforming technique through its enriched modules, libraries, toolboxes, packages,etc.

Why do we use Matlab for MIMO Beamforming?

The baseline of LTE is MIMO technology play a significant role in beamforming technology. Since it supports a large volume of data transmission in the communication channel. Further, SDMA support zero interference with multiple transmissions (synchronized) in identical frequency.

As an overview of beamforming, it is an efficient technique to concentrate on the targeted signal in specific directions with minimal or zero interference. Further, it also enhances the SNR over signals received at the destination point. In such a way, beamforming is the core mechanism for sensor arrays using MIMO-based wireless communication. The supportive technologies of wireless communications are WLAN, 5G, LTE, etc.

Moreover, the MIMO technique enhances the data flow capacity among user entities and base stations. Nowadays, beamforming techniques related to optimization are getting high attention among research interested people. In order to attain the desired optimization level, several hybrid beamforming techniques are increasing more. And also, these techniques are useful in terms of cost and system partition (among RF system and baseband).

Now, we can see how the importance of MIMO Beamforming Matlab. Since, Matlab is a colossal collection of libraries, toolboxes, modeling techniques, etc. All these are useful in build, test and develop MIMO-based beamforming models. In addition, it is also helpful in system-level examination and beamformer integration. Then, it enables you to deploy modeled beamformers to the HDL / C code of the system. For instance: HDL Coder™, Simulink Coder™, and MATLAB Coder™. Here, we have included some main components of simulation models which are used for MIMO beamforming Matlab. 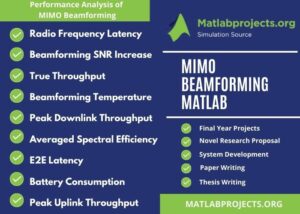 Our developers are well-experienced to incorporate the above components in MIMO beamforming models even in the case of complexity. To tackle complexity, we smartly develop our own algorithms and technologies. Further, we also have practiced all basic and newly released toolboxes to provide modernistic MIMO Beamforming Matlab projects Here, we have given you toolboxes that are specific to the MIMO beamforming process.

Though technologies of beamforming are advancing towards next-generation developments, it has some implementation issues regarding system performance. To solve these issues several pieces of research have been performed, but some issues are still looking for improved solutions. Our researchers have collected all major issues Here, we have listed some technical issues that are waiting to solve quickly in MIMO beamforming Matlab Projects.

At first, assume that you have 66 GHz mmWave and 64×64 array elements for your model development. Here, we let you know the simple processes to efficiently develop antenna array and segment the beamforming actions between RF and digital domains,

The initial step to accomplishing an efficient wireless communication system is to develop a beamformer and assess techniques. Further to evaluate the system performance, the beamformer is needed to combine with the system-level model. Then, evaluate the system through different steering, channels, and parameters. Next, analyze the trade-off between the digital baseband domain and RF-beamforming. Before parameterized evaluation, perform all these processes in the designing phase. For your information, here we have given you a list of performance parameters.

To the end, we are pleased to notify you that we give our services on area identification, topic selection, problem identification, solution identification (techniques and algorithm), code development (supportive MATLAB toolbox selection), manuscript writing, etc. In other words, we provide you top to bottom research and development services in MIMO beamforming of any wireless communication technology. So, if you looking for a reliable research service in MIMO beamforming MATLAB, then approach us.